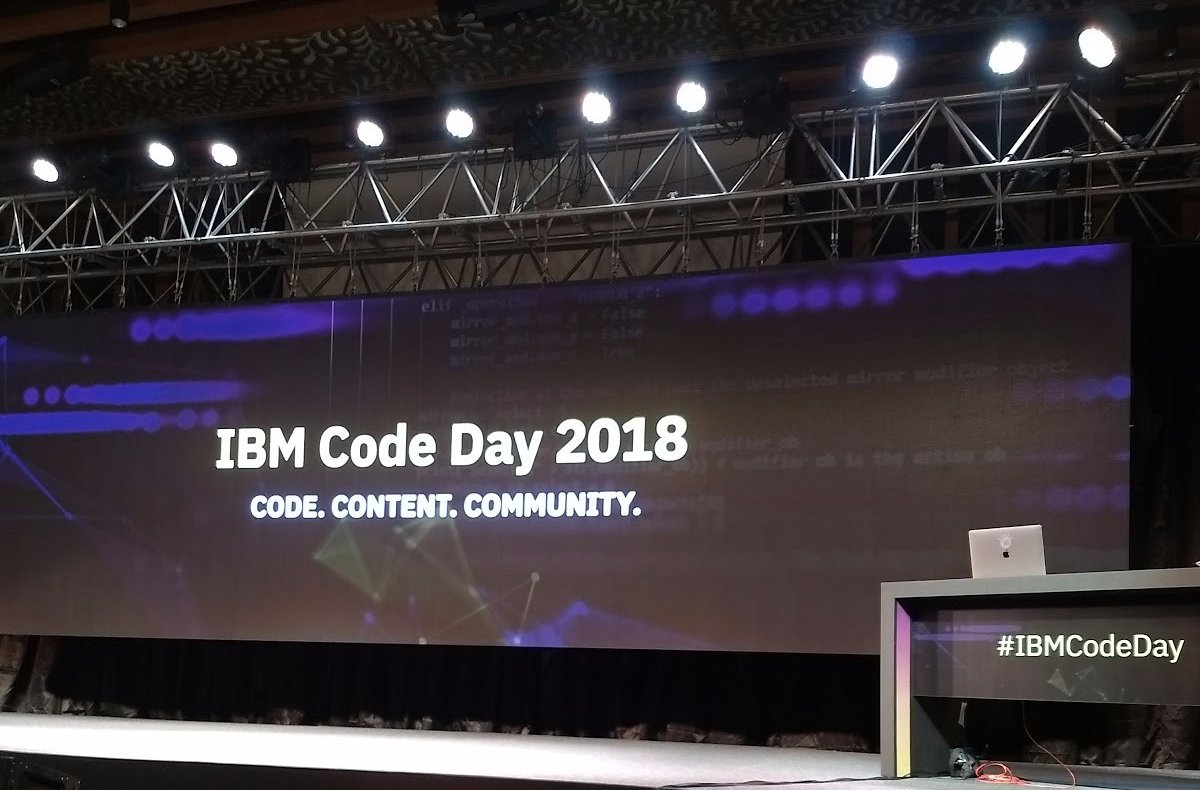 IBM code day 2018 was a demonstration of IBM’s capabilities in delivering a platform that uses the most latest Technologies. The mammoth in the room was IBM cloud, capable of solving any kind of real-world challenge thrown at it.

The day was filled with some of the best developers from IBM showcasing the power of their platform in terms of building applications powered by Artificial Intelligence. Hundreds of attendees used this opportunity to not just learn more about the AI, Blockchain, and Data science solutions by IBM but also got a lot of hands-on experience.

Being a machine learning and blockchain developer, I had an amazing day trying out the demos in VR, learning more about the powerful AI technology in text analysis, image recognition, and voice analysis.

IBM  had very carefully planned the technical tracks,  hands-on code labs,  and demos with each of these events aiming to showcase the robust features and use-cases of  IBM Cloud. So, in this article, I will share the key takeaways from this wonderful event. All the services, platforms and solutions from IBM are now under one roof which is the IBM Cloud. Be it Artificial Intelligence-based services,  blockchain based services, VMs and functions, all are available in one place.

At CodeDay 2018,  there was two major target audience. The first one was the developers. Developers like me were shown how we can leverage the existing services like the image detection service and integrate it directly into our applications.

The second target audience were the business experts. This group consisted of people who are experts in their domains but lack the necessary skills to code applications that can solve their problems. IBM Cloud has made it easy for business experts to upload their data, manually tag entities and train machine learning models all from the dashboard. All of this does not require even a single line of code to be written.

From what I gathered, IBM is trying to make it easy for the developers and Business experts to build and deploy enterprise scale applications and they have succeeded to a great extent.

IBM shows that it is not only ready to take on all challenges presently, but is also ready for the Future. IBM is the first company to put a quantum computer in the cloud. It has both the real quantum machine as well as a quantum simulator for developers and researchers to use and run tests. It was demoed by Tanmay Bakshi in his talk on the CodeDay and I found it to be fascinating.

From all the code labs, demos and talks, I have seen the focus on two major areas: Machine Learning and Blockchain. In the rest of the article, I will share what I saw with respect to these two topics. AI was one of the main highlights of the event. I got to see a variety of applications that are built on machine learning services.

One of the most prominent ones was the calories counter app. This app is built over the IBM image classification service which has the capability to identify hundreds of types of food.

So all a user has to do, is take a picture and submit. This is the level of simplification that can be achieved.

Another eye-catching feature for business experts was the ability to train image classifiers. Consider this example. A business expert in the road safety field will know an anomaly scenario in a given image or video. With the IBM Cloud Video tagging feature, the business user can manually tag images for a small subset and then let the AI tag the rest of the video.

This is two folded advantage. One is that the amount of tagging work is significantly reduced. And the second one is that the business expert can now train a classifier with the newly tagged data without having to know coding at all.

So, why is this important, you may ask? The reason is that business experts know much more about their domain than developers and they might not be able to transfer all their knowledge to the requirements. But giving them the capability to model their own classifiers brings it to a whole new level. Another set of code labs, talks, and demos were with respect to blockchains. This is a technology that is being talked about everywhere. Blockchain, though new,  has been gaining a lot of steam due to its features such as immutability and trustless network.

IBM Blockchain based application was demoed on the CodeDay and it was an insurance application.  The advantages of using blockchain in the case of insurance are that the data cannot be tampered, the system is a ledger so tracks the premiums of the applicant in a straightforward transparent manner.

What appealed to me the most about this is that the use of blockchain by developers has been abstracted a lot. This means that, me as a developer, can build application that run on blockchain very quickly.

The dashboards give a lot of insights about the application and the data that it has. It give us the ability to easily integrate with the blockchain to not just use tit but to derive useful information from it.

What was this for me?

To conclude, IBM CodeDay 2018 was an event to give developers a sneak peak into what IBM is doing  and give us a feel on the vast array of services and solutions provided on the IBM cloud.

Watching Tanmay Bakshi speak about IBM’s aim to be feature ready with Quantum computing was a memorable event. The live demo on food item classification struck a chord with the audience on the capabilities of the platform. Another thing worth mentioning was the live games and fun zones that were created to show people how IBM cloud services can be used. Be it using the Speech analysis to create the Star Trek VR game or the personality analysis from tweets to create the Star Wars LIghtSaber game, the power of the platform was very evident.

I as a developer got a lot to take away from the code day. Lots of new things that I discovered and got an opportunity to see the passionate IBM community. Can’t wait to get my hands dirty and build some applications!

Challenges of moving abroad for studies: can there be a hassle free way?